Victory Park Saloon Billy Can Can Debuts This Month 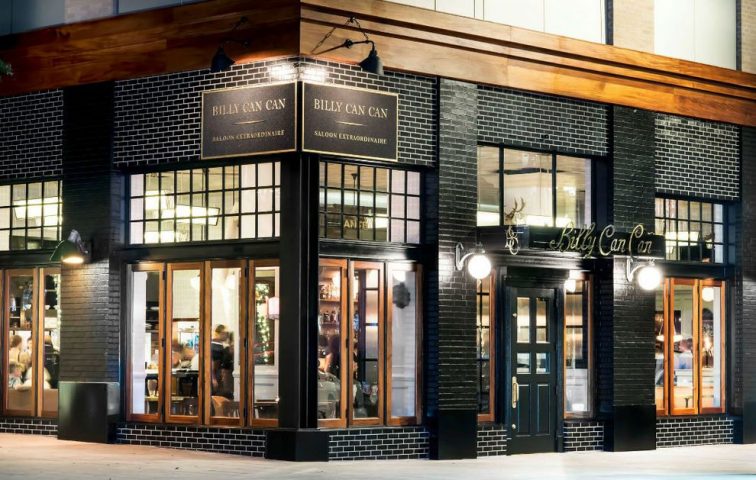 Billy Can Can, a new bar and restaurant from restaurateur Tristan Simon, has finally announced plans to open in Victory Park.
The self-described-”saloon,” in the works since early 2017, is set to arrive at the end of June at 2386 Victory Park Lane, according to GuideLive. It’s the first of many planned new eateries for Victory Park, which has struggled for years to attract diners to the neighborhood, and hopes to revitalize an area that never really took off. It will be interesting to see how the food shakes out at Simon’s first eatery under the Rebees umbrella, especially considering that Dallas Morning News restaurant critic Leslie Brenner has been involved with the project since leaving the paper in 2017.

As far as the food is concerned, Chef Matt Ford will helm the kitchen and serve a menu of Southern fare mostly inspired by Texas. Look forward to familiar plates like Gulf snapper, venison tartare, and deviled eggs, all exhaustively tasted by Brenner before hitting the menu. As with any saloon, Billy Can Can will have plenty of cocktails, including drinks inspired by Victor Tangos, the now-shuttered Henderson Avenue restaurant founded by Simon.

Billy Can Can makes its Dallas debut on June 28.

Valentine’s Day Date Guide in Victory Park for Every Couple

This website uses cookies to improve your experience while you navigate through the website. Out of these cookies, the cookies that are categorized as necessary are stored on your browser as they are essential for the working of basic functionalities of the website. We also use third-party cookies that help us analyze and understand how you use this website. These cookies will be stored in your browser only with your consent. You also have the option to opt-out of these cookies. But opting out of some of these cookies may have an effect on your browsing experience.
Necessary Always Enabled
Necessary cookies are absolutely essential for the website to function properly. This category only includes cookies that ensures basic functionalities and security features of the website. These cookies do not store any personal information.
Non-necessary
Any cookies that may not be particularly necessary for the website to function and is used specifically to collect user personal data via analytics, ads, other embedded contents are termed as non-necessary cookies. It is mandatory to procure user consent prior to running these cookies on your website.
SAVE & ACCEPT
X